Intel and Micron Team Up to Create New Memory

Tech giants Intel and Micron’s have announced plans to create a new and improved form of memory used in computers. It’s no secret that memory directly affects the performance of a computer. More, faster memory yields better multitasking capabilities and improved overall performance. But computer hardware manufacturers have been developing new memory for years now, so what makes Intel and Micron’s any different? 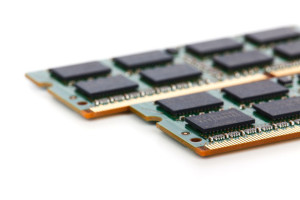 Dubbed Xpoint Memory (pronounced crosspoint memory), it consists of multiple stacked layers of wires that resembles crosses when viewed from a topographical,overlooking perspective. According to various reports, Xpoint Memory is more or less a combination of NAND Flash Memory and traditional volatile memory. This means it preserves data during power outages and device shutoffs, but yet it’s capable of reading and writing data at speeds 1,000 times faster than current memory.

It’s important to note that Xpoint Memory is intended to be used with solid-state drives (SSD), which have become increasing popular over the past few years. Unlike traditional SATA hard drives, SSDs have no mechanical components, rather they read and write data digitally. This allows for superior speed and performance, often improving computer startup times by more than 500%.

What’s even more interesting is that, according to Fortune, Xpoint Memory is smaller and more portable than traditional memory. Fortune claims users can fit ten times the amount of Xpoint Memory into their computers because of its small size. This alone should make an appealing choice for both consumers and business owners who are struggling with limited space within their PCs.

“…because the 3D Xpoint memory combines some of the elements of NAND and DRAM, you can have a lot of it (10 times more than current DRAM) and it’s non-volatile, which means that when the power goes off the data stored in it will stick around,” wrote Fortune magazine in an article describing the new memory.

There are some potential hurdles of Xpoint Memory, including its power efficiency (or lack thereof). While details remain largely unknown at this time, reports indicate that Intel and Micron’s new memory is going to consume more power than NAND Flash memory, meaning it could “up” operating costs for company servers. On the plus side, though, its improved speed and performance could offset these costs. Yes, you may have to pay a higher electricity bill to keep it running, but the faster speed and better performance should make it worth it in the long run.

Previous: US President Obama Seeks ‘Super Computer’
Next: Why am I not seeing all my Ram Memory?