Home / Ram Memory / A Look Back at The History of RAM

A Look Back at The History of RAM

Random access memory (RAM) has come a long ways over the years. G.Skill, for instance, recently released its Ripjaws 4 DDR4-3333 memory kit, which features four 4GB modules clocked at either 33000MHz or 32000MHz. Of course, there are several other companies developing larger and faster memory chips. So, how did mankind make the technological leap to such powerful RAM?

Some of the world’s first electronic “computers” used mechanical counters to perform memory functions. Using a device called a vacuum tube, they were capable of writing small amounts of data, but there was a catch: they could only reproduce data in the order it was written. It wasn’t until the transistor was invented that RAM really began to evolve and form shape into what we know visualize it as being.

After Bell Labs invented the transistor, smaller and faster memory registers were created. They were still relatively ineffective when used in large applications, though, as a typical memory register could only hold a few hundred bits of data. 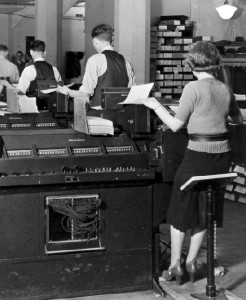 Fast forward to the 1947 and the first real random access memory was created, dubbed the Williams tube. Using a design similar to that of the earlier model vacuum tube triodes, it wrote data in the form of electrically charged marks. Because it utilized an electron beam through the CRT, the Williams tube was capable of reading and writing spots in any order; thus, the memory was random.

So, how much data could the Williams tube hold? Reports suggest that it was capable of storing up to a few thousand bits. It was a huge improvement from the earlier vacuum tube triodes. Furthermore, the Williams tube was more energy-efficient, faster and more powerful.

In 1947, magnetic-core memory was invented. As the name suggests, it used magnetization to store single bits of data. Magnetic-core memory became the “go to” choice of memory up until the 1970s, at which point DRAM took its place.

In 1968, Robert H. Dennard created the world’s first dynamic random access memory (DRAM). Using a single transistor for each bit, it eliminated the need for bulky 4 and 6-transistor latch circuits. The end result was higher memory density with greater volatility. The advent of DRAM paved the way for ground-breaking new technological developments in the field of memory. Going back to the example in the first paragraph, the new 16GB G.Skill Ripjaws is capable of storing up to 128000000000 bits of data, whereas the early model vacuum tubes could hold just a few hundred bits of data.